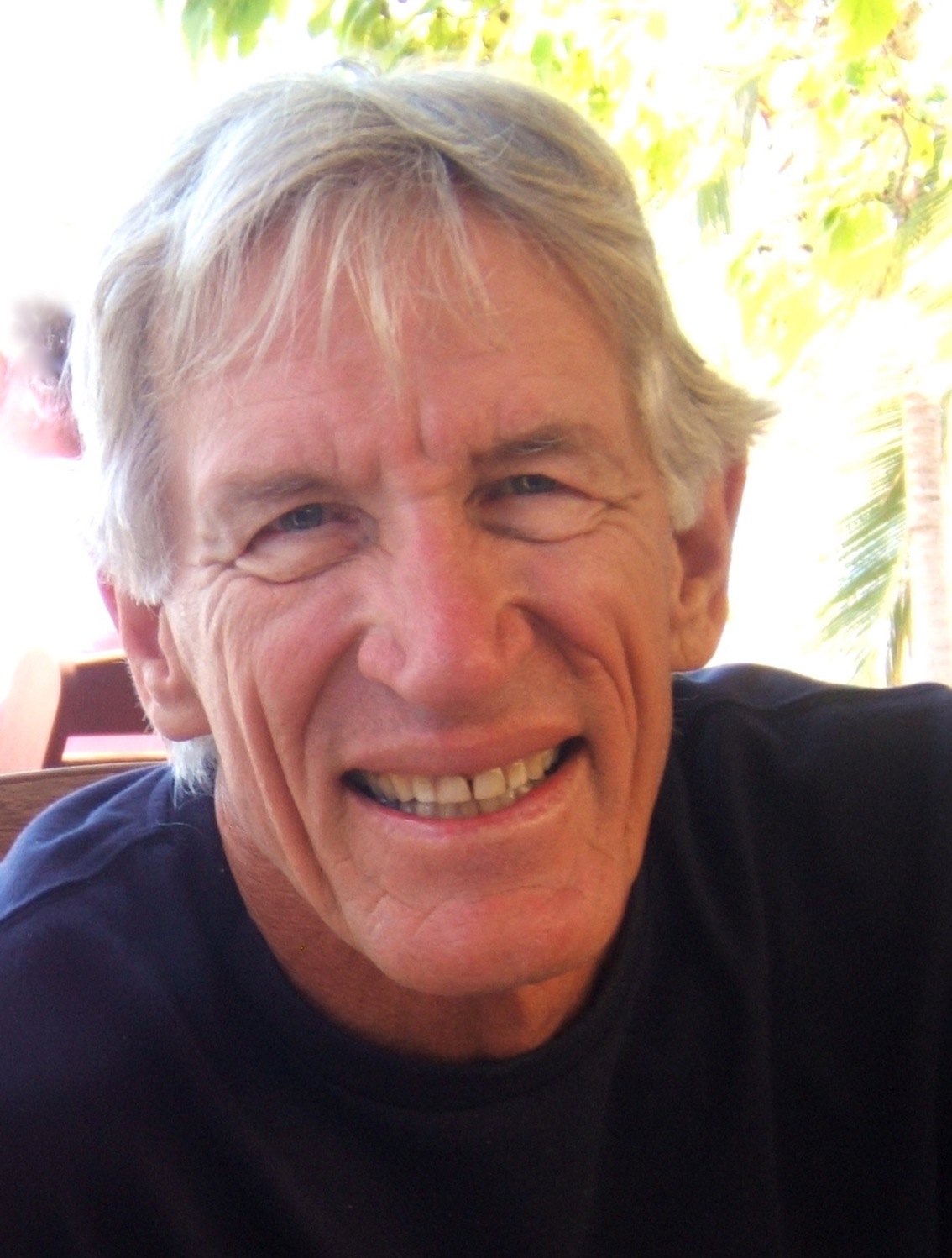 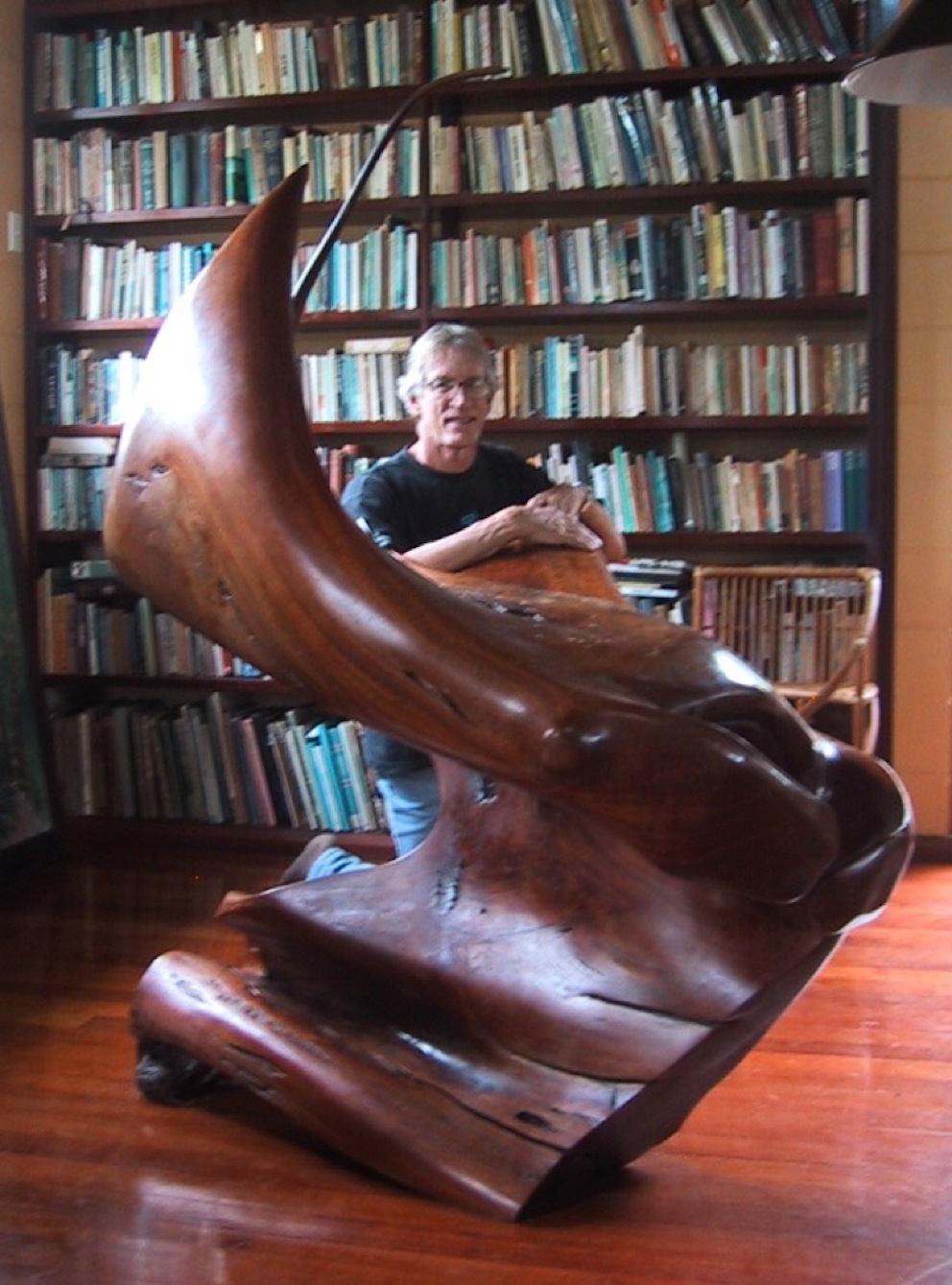 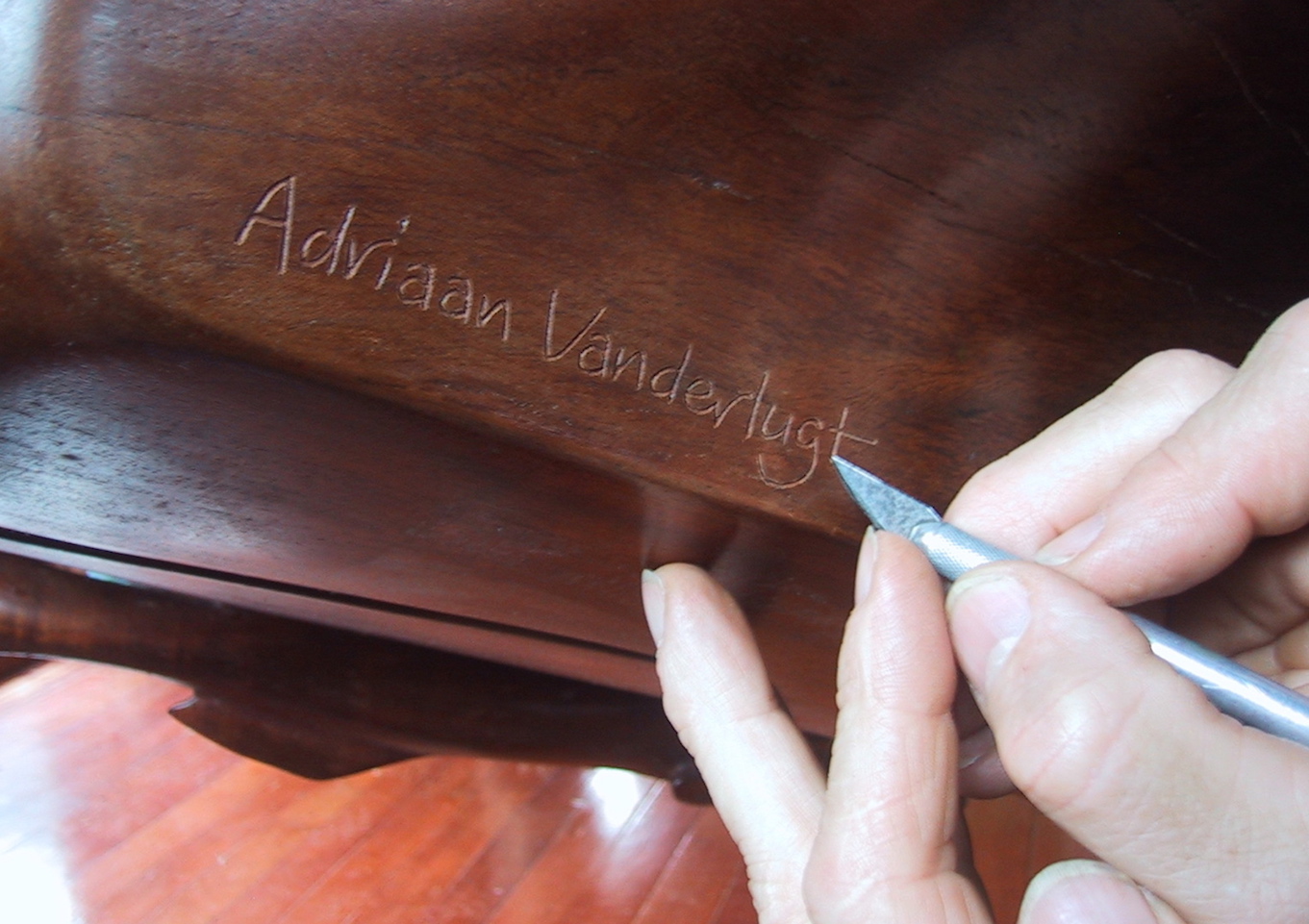 Adriaan Vanderlugt was born in the Netherlands and grew up in Canada. Upon graduating from High School in 1962, his art career began in a Graphic Design Studio in Hamilton, Ontario.  He exhibited his first sculpture in a juried exhibition in 1970 in Hamilton and won awards in the Ontario Craft Foundation ’75. Adriaan had three alphabet designs accepted in a Lettergraphics International Alphabet Design competition in the USA in 1976.

In 1977, he emigrated to Australia and now lives in the Whitsundays with his Australian wife, Denise.

His first sculpture exhibition in Australia was in Gosford in 1983 and his work has been included in many group showings since.  He has also held a number of individual exhibitions.  Adriaan was invited to be part of the 1986 ‘Australian Fortnight’ in Dallas, Texas, USA and was a guest artist at the Trans Tasman Wood Exhibition in Sydney in 1991.

Adriaan has been carving bone, stone, wood, marble and metal for over five decades and his sculptures of animals, birds and fish are held in collections around the world.   In 1997 he was commissioned to create the furniture for the new chapel on Hayman Island.

For the Centenary of Federation Celebrations in 2001, he created a number of public sculptures for the Mackay Whitsunday Region.  His sculptures have been included in four ‘Strand Ephemera’ and two ‘Fringe Ephemera’ Exhibitions in Townsville.  He also exhibited two sculptures at the ‘12th Thursday Plantation East Coast Sculpture Show’ in Ballina in 2007.   His first entry in the SWELL Sculpture Festival was in 2009 and his sculpture ‘Five White Shorebirds’ was acquired by the Gold Coast City Council and installed at Rainbow Bay in Coolangatta.  He has had entries in five subsequent SWELL Sculpture Festivals.

In 2012 Adriaan  was  commissioned to create public sculptures in western Queensland, with Five ‘Woolbale’ Sheep for the town of Quilpie and a 3.5m Bottle Tree at the Living Arts Centre in Blackall.  Then from 2013 to 2018, he installed a group of seven wood wildlife sculptures outside of the Mackay Entertainment Centre.

In 2018-2019 Reef Ecologic hosted a project to install Australia’s first underwater sculptures in the Great Barrier Reef and Adriaan was asked to create two of the six sculptures proposed. A 4m wide Manta Ray was installed at Manta Ray Bay and a 4m long Maori Wrasse was placed in Blue Pearl Bay, both in the Whitsundays.

A private commission in 2019, was to recreate the well known sculpture of the ‘Musicians of Bremen’ for an Animal Rescue practice. This resulted in a 2.8m tall scrap metal sculpture placed at the entrance of the property in Preston, near Proserpine.

As an Art Consultant, Adriaan was helpful in revitalising the Streetscape of Proserpine in the 80’s and 90’s and was involved in creating the ‘Green Room” at the Proserpine Hospital.  For six years, Adriaan wrote a weekly Art Column in the Whitsunday Coast Guardian for which in 2005, he received a Mackay Regional ‘Arts-is-in Award’ for recognition of his media coverage of the arts.

In 2003 he was honoured with an Australia Centenary Medal ‘for distinguished service to the arts’.

In December of 2013 Adriaan was filmed for an Episode for the TV Show ‘Colour In Your Life’ hosted by Graeme Stevenson which has since been distributed worldwide.